The Seattle Sounders are the newest addition to the Major League Soccer (MLS), which will most probably have two more Northwestern teams in 2011: Portland Timbers and Vancouver Whitecaps. All these teams have established traditions in earlier leagues; the Sounders were a USL team in the period 1994-2008 and an NASL team from 1974 till 1983. They play their games at Qwest Field, also home of the Seattle Seahawks (NFL); for NFL games it holds 67,000, but for MLS games it is capped at 32,000 (i.e. the upper ring is closed off). Although 32,000 is a lot for the MLS, the Sounders have so far drawn an average of roughly 28,000 people! Hence, I had ordered my ticket in advance, through the inevitable rip-off Ticketmaster, which charged me a total of $40.45 for a (tight) seat behind the goal. 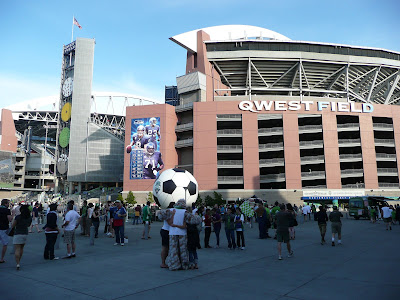 I drove up from Eugene early, taking my time for the 460 km drive and for a visit to Red Mill Burgers. I parked downtown, checked into my hotel, and then walked to 3rd Street, where I took a bus for a couple of blocks, until I got out and simply followed the green crowd to the stadium. Within the stadium people were entertained by a (Brazilian?) guy who did all kind of tricks with the ball, as well as the Sounders band (playing anything from Beyonce to the Red Hot Chili Peppers); something you normally only see at college teams. 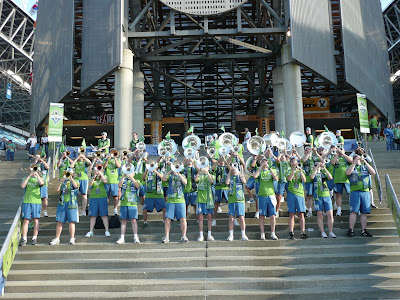 For full disclosure, I must admit that I am a (recent) Portland Timbers fan and that we hate the Shittle Flounders. Although my allegiance isn’t that strong yet, I didn’t have a hard time finding dislike with the Sounders. There was something artificial about the whole experience (including the English announcer); but more about that… after the national anthem (which a surprising number of fans sang along with). 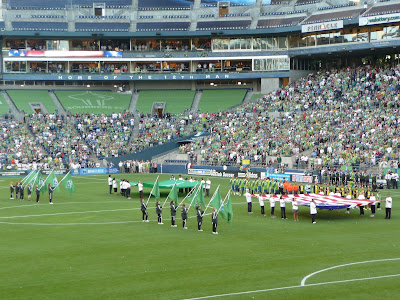 The game was between the newcomers from Seattle and the current MLS champions, Columbus Crew. The official attendance was 29,126, an impressive number for any league. I even identified some 50 Crew fans, probably all inhabitants of Seattle; as I doubt many had made the 4.000 km (!) trip from Columbus, Ohio. The Sounders ‘ultras’ were behind the other goal, sporting many banners, a large flag, but few songs. 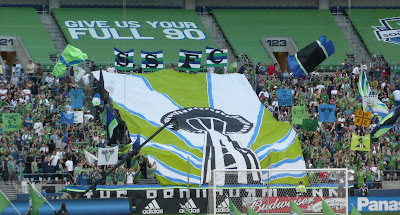 After a good start of the season, the Sounders have drawn most of its games, and people were eager for a home win. Particularly because the Crew have a difficult start this season, and the Sounders have the most famous player in the MLS: Swedish international Freddie Ljungberg (ex-Arsenal and ex-West Ham United) – let’s face it, Beckham is not in the MLS! Most supporters were donning the typical green colors of the Sounders, which, together with the sheer numbers, did give it a real European football look.


The start of the game was for the Crew. After a first shot and a good chance, the visitors scored in the 11th minute with a strong shot: 0-1 and the stadium went quiet. Slowly but steadily the hosts got back into the game, while the whiny fans increasingly complained about the opponents and referee (who was indeed crap, but didn’t favor anyone). The fact that kids were handed small cow bells to make noise helped the atmosphere, as did the occasional interference of the band (which was right above me). In the 30th minute, Ljungberg was fouled in the box and got a penalty, which he took himself.

And once again, the old football law was confirmed: thou shan’t take thou’s own penalty! Now the fans around me were even whinier, though not about Ljungberg, who put in a fairly dismal performance and mainly excelled in complaining to the referee and his fellow players. At the same time, it was the Crew who had the better chances, once stopped by a very smart foul (which only cost the defender a yellow card but prevented a possible goal) and once by the famous Sounders goalie, 39-year old Kasey Keller. To my silent joy, 0-1 was the half time score. 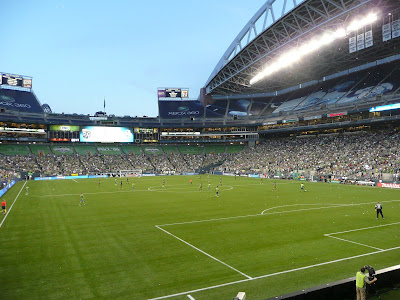 The second half started with a lot of pressure from the hosts, but to little avail. The visitors dominated the midfield, where they passed the ball around comfortably. However, in the 57th minute the Sounders set up a fantastic attack, admittedly through Ljunberg, which was finished with an insane volley in the far corner: 1-1! This gave the Sounders and their fans a bit more belief in a victory, even though most of the game got stuck between the two penalty boxes. The most exciting, and debated, period was when the referee punished a pass back to the Crew goalie, which led to an indirect free kick at roughly 10 meters of the goal. 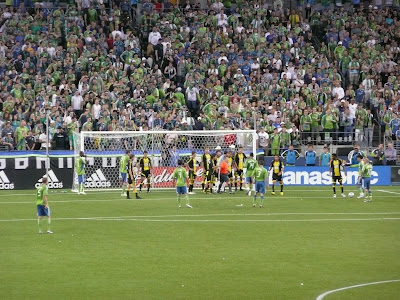 Despite minutes of discussion and shoving, the free kick ended as 99% of these do, with a lame shot in the wall of people. The closer we came to the end of the game, the more desperate the fans and players became. Now everything the Crew or referee did was booed and whistled. Obviously, this didn’t change the fact that the visitors had little problems keeping the tie. When, in the first minute of extra time a Sounders defender got a red card, it was clear that this game was going to end in yet another draw: 1-1. 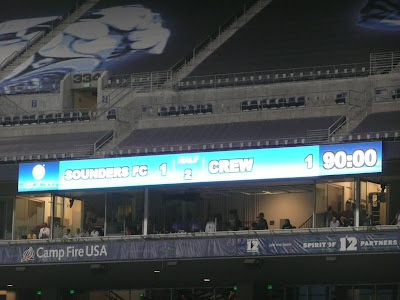 So, what to make of this game. On the one hand, this was clearly the most ‘European’ football game I have seen in the US. There was a big crowd, which was sporting the official gear, and the level of the game was acceptable (similar to a lower level game in the Dutch eredivisie). On the other hand, few fans seemed true football fans and the whole experience was very managed and corporate. That said, this does come from a Timbers fan, so maybe you will enjoy it more! In any case, I can’t wait for 2011!
Posted by Grondhopper at 7:45 PM

Can you tell me what you mean by managed and corporate? How was it different than any other soccer team with a corporate logo on the kit and a digital advertising banner around the pitch like the majority of EPL teams?

Enjoyed your viewpoint and article.

True, virtually all teams have corporate sponsors, but what I find remarkable about the Seattle Sounders, as well as many American baseball teams, is that the whole fan base and game experience is managed by people handing out flags and cow bells, encouraging people to chant, providing songs, etc. When you go to games in Europe, and dare I say Portland :-), fans come up with their own gear and songs. In other words, the experience is largely spontaneous.

When the Liverpool fans sing May You Never Walk Alone, it is started by Gerry & the Pacemakers playing on the sound system. It has become a long and wonderful tradition for them but I guess you would call that corporate too.

Just like the Portland Timbers, the Sounders are owned by some wealthy people who happen to love soccer.

As for the singing of the national anthem, that's been a thing at Qwest for soccer from the start- the guy says "sing along" to encourage people to do so.

And as Tisha points out, the tifo in the Brougham (south) end is all homemade. The club's involvement is limited to allowing the ECS (supporters' group) to store the bigger stuff on-site ahead of time, but we come up with the money and the gear ourselves.

Same thing with the flags; that was a homegrown deal. I've never seen cowbells handed out by anyone in the club. A couple of games ago, they did hand out those dreadful thunderstick things; the supporters' group took them and turned them into a giant "Hi Mom" sign (it was on Mother's Day) and then threw them out. :)