It has been a very long wait, but the football (“soccer”) season is finally starting in the US. The MLS started a couple of weeks ago and now the USL1, the Second Division, has kicked-off too. I decided to drive up to Vancouver, which is roughly 700 km from Eugene, to see a game of the oldest professional team in North America: the Vancouver Whitecaps. Founded in 1986 as the Vancouver 86ers, which dominated the Canadian Soccer League (CSL), it moved through the American Professional Soccer League (APSL), and A-League into the United Soccer League (USL), and changed its name to Whitecaps in 2001. It has been playing in the multifunctional Swangard Stadium, with a capacity of 5,288, in the suburb of Burnaby. As of 2011, the Whitecaps will play in the MLS and move to the BC Place Stadium (although they hope to move to the Whitecaps Waterfront Stadium, which so far only exists as a plan). 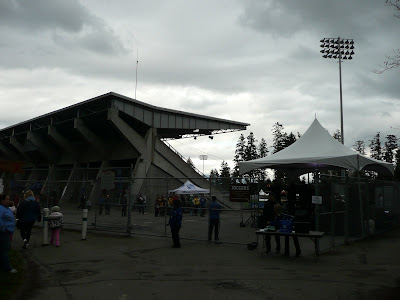 As I had driven almost a full day to get to Vancouver, I had taken no risk and bought a ticket online (through the almighty Ticketmaster). Overall, the costs for this cheapest ticket was 25 CAD (ca 17 euro), after all extra charges, quite hefty for this level and, what turned out, a very basic and uncomfortable seat. After parking in the area around the stadium, I walked to the stadium, fighting off unsuccessful scalpers (the game wasn’t sold-out), and picked up my ticket at the “will call” table outside of the stadium. 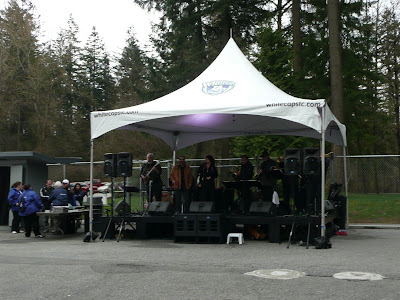 The pre-match program included a corny cover band, but I used my time sampling the good variety of snacks, including a decent gyros sandwich (7 CAD) and a freshly grilled hamburger (5 CAD). Topping it up with a small popcorn, I circled the pitch to find my seat, which turned out to be in a make-up stand under some kind of tent-structure. Still, it wasn’t much different from the “VIP section”. ;-) 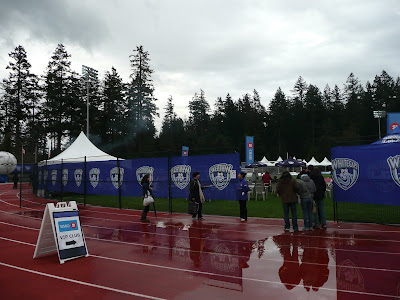 While all sports games in the US are started with the singing of the US national anthem, this ‘international’ game obviously needed two national anthems: “Star Spangled Banner” and “O Canada”. To my surprise, many spectators actually sang along with the Canadian anthem – something not even seen in the US! 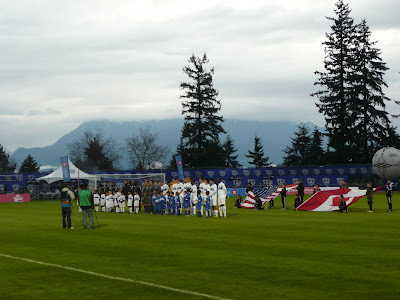 After this compulsory display of patriotism it was finally time to kick-off the new USL1 season. The stadium was decently filled – the official tally was a somewhat unconvincing 5.037 – and I was amazed by how multicultural the audience was (I was sitting next to some Arabs, behind some Africans, and in front of some Asians, for example). Behind one of the goals was a small but determined section of “ultras” who created what they thought was a genuine football atmosphere. Not surprisingly, no away fan had made the 5.000 km trip from Charleston, South Carolina. ;-) 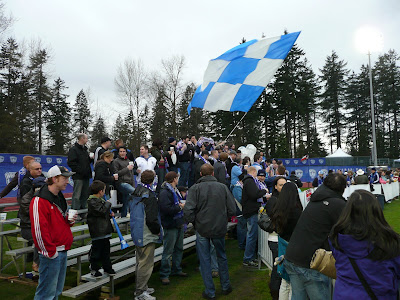 To be honest, the level of play was, at least initially, not that bad. Both teams played tactically intelligent and technically decent football, even though the pace of play and passing wasn’t very high. That said, both in quality of play and quantity of attendance the game could easily hold its own with second division games in countries like Belgium or Austria. While no player of the teams is well-known, there was one with a fantastic name: Bellisimo, the right-wing defender of the Whitecaps. 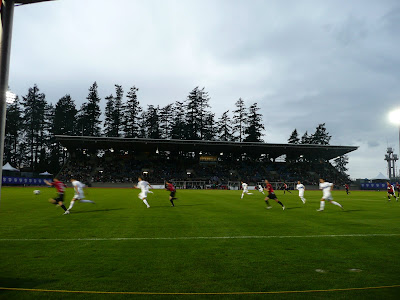 Although the game was of a decent quality, few chances were created on either side. It took fifteen minutes for the first excitement, a shot at the far post for the hosts. The Whitecaps dominated the first half hour, but this remained their only real threatening situation. At the same time, it rained cats and dogs, and I was happy to sit under the make-shift tent structure – still admiring the couple hundred fans who remained uncovered and singing. Much less pleasant was the guy a couple of seats next to me, who said “Come on Whites” every 30 seconds!

In the last ten minutes of the first half the visitors get better, and even start to pressure a little bit. They seem to have better skills, particularly in their counterattacks, but do not really create any clear chances. Hence, 0-0 at half time, which I kill by watching the little kids play a game at the half pitch. 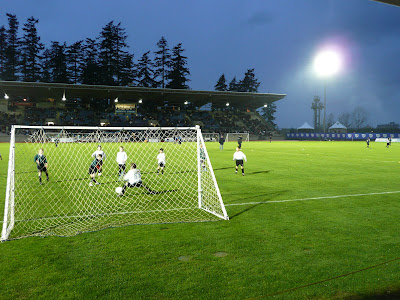 The second half is played at a much lower pace and with similarly few clear chances. In the first 20 minutes the Charleston Battery created the best chances, including a short just wide and a weak header on the goalie. 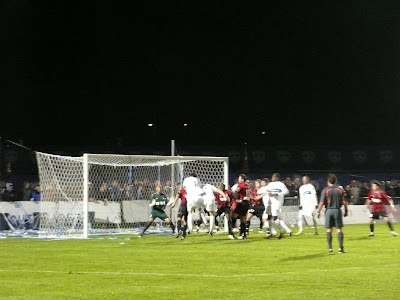 After that the Whitecaps are able to put some pressure on the visitors, but except for some rebounds very little truly threatens their goalie. Even the chanting of “We are the South Side”, by the “ultras” behind the goal, cannot change the inevitable 0-0 final score. 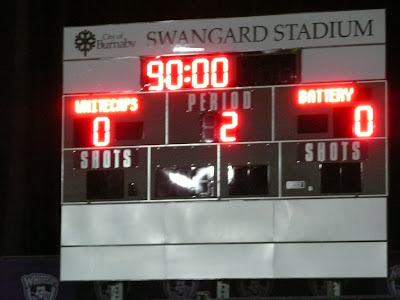 To be honest, I had expected the start of the football season a little bit more exciting. While I do believe that the Pacific Northwest (PNW) is a natural habitat for football, Vancouver still has a long way to go before it can seriously compete in the MLS. That said, the multicultural appeal of the club will be vital in its future, given the huge immigrant community in the city. Moreover, the prospect of playing derbies against two other (new) MLS teams in the PNW, the Seattle Sounders (in MLS since 2009) and the Portland Timbers (who will join with the Whitecaps in 2011), as well as the move to a serious stadium, will probably help raise the numbers of both spectators and sponsors.
Posted by Grondhopper at 3:37 PM

Groundhoper ...next time come out and join us Southsiders next time for a pre-match beer and try to time your trip for at least June better weather and football.

Seemed a little bit condescending towards the Southsiders, who have never claimed to be an Ultras group but die hard supporters. Who I might add were doing this years before there was a Timbers Army.