As this was going to be one of my last visits of Atlanta, and the last time during Football season, M.G. and I got tickets for a game between two of the main teams of the Atlantic Coast Conference (numbers 31 and 16 nationwide). As these games are sold out well in advance, we went online (at StubHub) and paid 85 USD each. 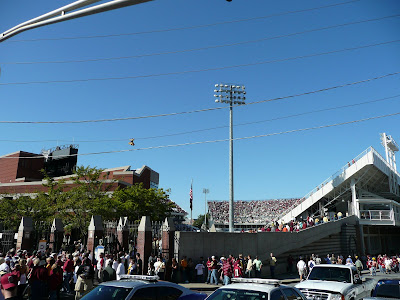 Already on the walk to the stadium we were surprised by the number of fans of Florida State University, in Tallahassee, a good 270 miles to the southwest. Around the stadium there seemed to be as many white-old gold home fans as garnet-gold visitors. Everyone was in jolly spirits, enjoying the surprisingly sunny weather. 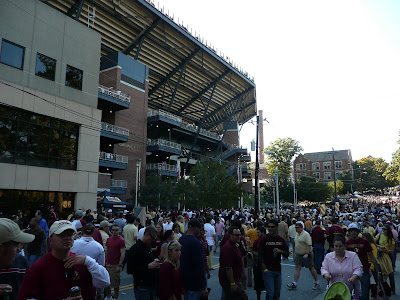 After an endless climb up the stairs we took our place in the scorching sun… surrounded by Florida State fans. The Bobby Dodd Stadium at Historic Grant Field is located at the city campus of Georgia Institute of Technology. It has a capacity of 55,000 – today’s official attendance was 53,528 – and gives an impressive view of downtown Atlanta. 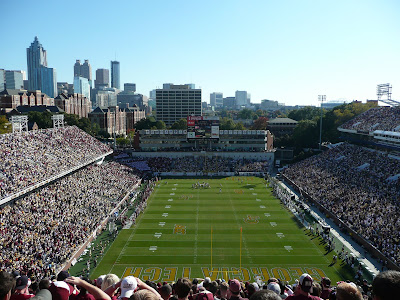 The game started very well for Florida State, which made me root for the Yellow Jackets (i.e. Georgia Tech). After the first quarter the visitors were 10-3 up and we were semi-broiled. Even though it was the first of November, the sun was shining as if it was middle of July in the south of France. 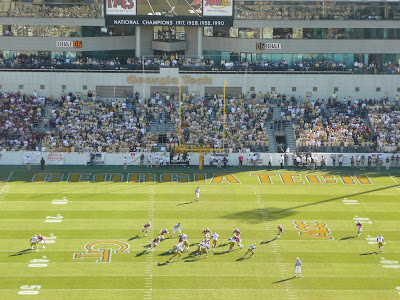 The second quarter the game exploded, with the Jackets scoring three touchdowns in a row, before the Seminoles could get a touchdown back. A 45 yard field goal sealed the quarter with a small lead for the hosts: 20-24. 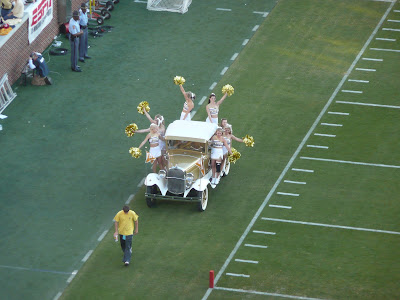 After a half-time of band music and cheerleading, the third quarter solidified the Georgia Tech lead: 20-31. As the FSU fans around us were looking increasingly desperate, and we were finally starting to hear the home fans, the game changed yet again. The fourth quarter was all about the visitors, which first scored a touchdown and then converted with a field play (i.e. 2 instead of 1 point). However, that was all they had time for, so in a narrow ending the Jackets won 28-31 against the Seminoles. The first victory of Georgia Tech over Florida State since 1975! 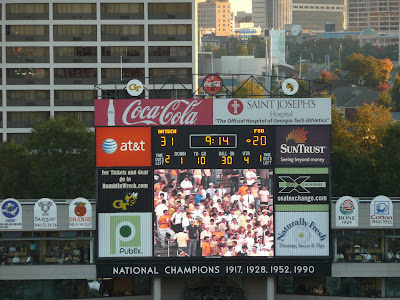 To be honest, I wasn’t that impressed by the home fans. The Bobby Dodd Stadium is a great football ground, smack in the middle of a city, but this game the visitors (accounting for almost a quarter of the attendants) seemed to make most of the atmosphere. That said, it was great weather and a good first American Football game!
Posted by Grondhopper at 10:36 PM