The great thing of living relatively close to four countries is the possibility of double hops, i.e. two games on one day. Normally these are done on Saturdays, when you start in Germany, where they play in the afternoon, and end in Belgium, France or the Netherlands, where they play in the evening. Unfortunately, I have seen the vast majority of teams in the larger Ruhrgebiet, in the west of Germany, and it has become more difficult to find suitable German teams for double hops. Fortunately, however, JB is not afraid to drive mean distances, and I am still able to get myself out of bed at 7.30 on a Saturday.
SV Darmstad 98 – Karlsruhe SC II 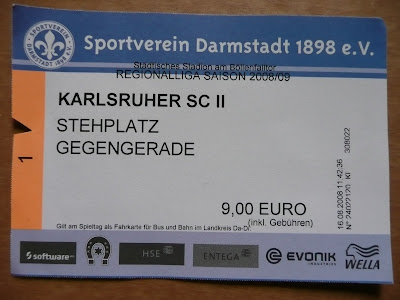 Leuven to Darmstadt is almost 400 km, which we made in good 4 hours as the roads weren’t too busy and few roadworks slowed us down. Moreover, Darmstadt must have the best signing of all cities I know, as we were directed to the Stadion am Böllenfalltor without any problems. 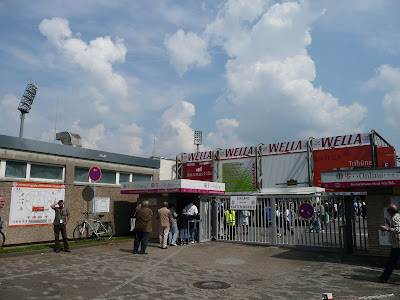 We parked just outside of the stadium, which is quite ugly from the outside. At 9 euro a piece we bought tickets for the non-seating area, as it was very sunny and we wanted to enjoy one last real summer game. The Böllenfalltorstadion was built in 1921 and hasn’t been renovated since 1974. It can hold 20.000 people and counts only one covered stand, seating 4.000. After eating a spicy Zigeunerwurst (gypsy sausage), and buying a nice pennant in one of the two small but well stocked fan shops, we took our place in the sun on the huge long stand. 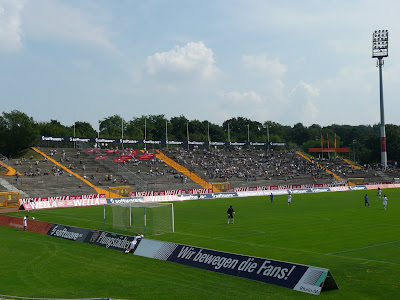 SV Darmstadt 98 is a name from the past; in my youth they played consistently in the Zweite Bundesliga Süd (Second Division South); in the late 1970s and early 1980s Darmstadt even played in the Bundesliga (First Division). But they have fell on hard times in the 1990s, relegating to the Oberliga Hessen (Fifth Divison Hesse). Last season they became champions, promoting to the Regionalliga Süd (Fourth Division South). However, before playing their first game in that division, a bankruptcy had to be averted (once again) over the summer.
For the season opener some 1.500 people made it into the stadium, including possibly 10 from Karlsruhe (only 109km away, but then again, these are the reserves and the first team played at home), enjoying the sun rather than the game. Incidentally, the stadium announcer spoke of “2.600” attendants, but that seemed highly exaggerated. Still, one section of the home fans created a lot of atmosphere, singing throughout the whole of the match. 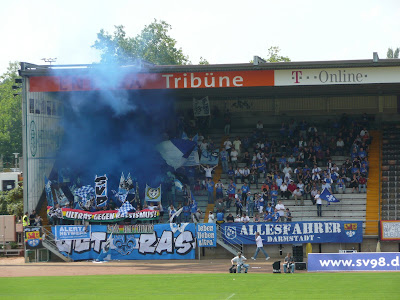 In the first half there was very little to sing or talk about. Both teams played very poorly. Darmstadt couldn’t do much better and KSC II didn’t want to. We mainly enjoyed ourselves with the sun and people watching. 0-0 was the logical half time score. 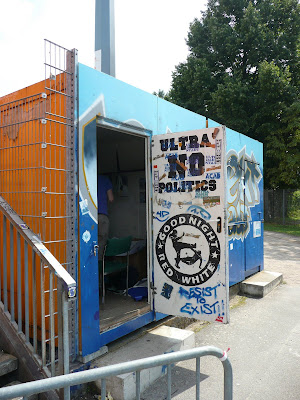 The second half started fairly similarly, but was soon to divert radically. Despite huge protests on the stance, the referee gave a deserved penalty in the 50th minute, after a defender held a striker obviously and stupidly. KSC took the gift: 0-1. 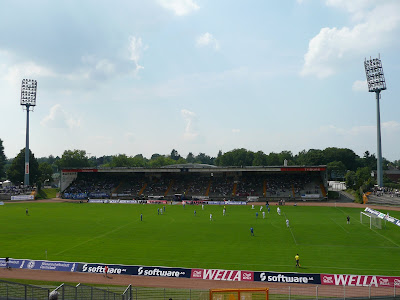 This finally opened up the game. In the 62nd minute the visitors laid down a good and simple over the right side and finished it with an easy header: 0-2. One minute later they had deserved another penalty, but the clearly intimidated referee didn’t dare to give it. As the “Blue Madness” kept singing, and their team kept pushing, this cowardice decision almost made a difference. In the 70th minute, after a corner kick, Darmstadt scored the 1-2, after three attempts. 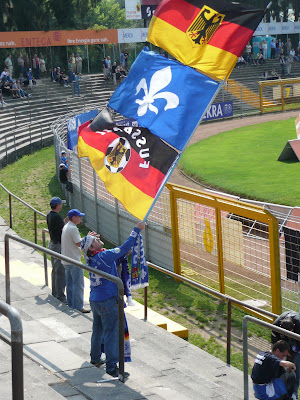 Still, the difference between the two teams was simply too big. After a gallery play attack, the visitors got a penalty. It was finished with a fantastic heel of the ball (Hackentrick): 1-3. Afterwards the had two more attacks (a strange bouncing ball on the cross bar and a counter attack that was shot wide) before they scored their final goal, in the 87th minute, after a simple counter attack:1-4. Even the Blue Madness was silenced by that. 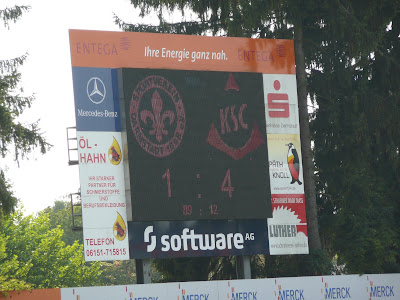 As virtually all other spectators, we left the meet and greet with the players, which was to follow the game, for what it was. Instead, we made virtually exactly the same road back. 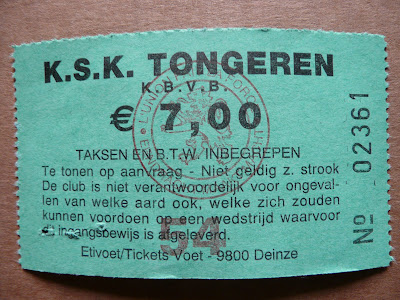 After a good three hour drive, and an impressive snack just off the motorway in Tongeren, we arrived (a bit late) at Op de Keiberg, the rather soulless stadium of a rather soulless club. 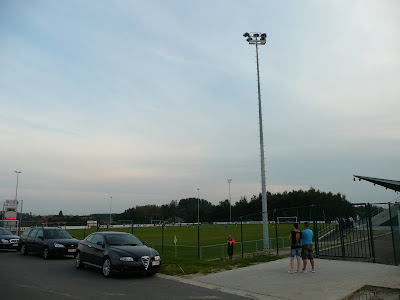 De Koninklijke Sportkring Tongeren Hedera Millen plays in the Derde Klasse B (Third Division B), but this game was for the Belgian Cup, against second divisionist Royal Olympic Club de Charleroi-Marchienne. We entered the stadium through the aligned sports hall, where we bought a ticket for 7 euro (everywhere but at the one main stand). 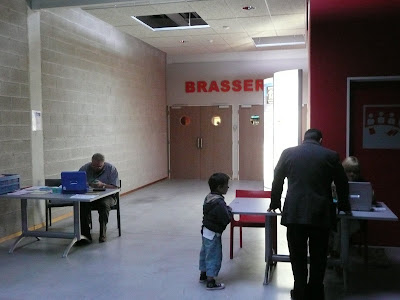 Some 250 people attended the game, at least 75 from Charleroi, more than 110 km away! They saw a rough games, which many quite brutal fouls (mostly from Tongeren defenders and midfielders), which were not penalized enough by the soft referee. Only in the 42nd minute a first good chance materialized, from the visitors, but they headed just wide. 0-0 was the half time score.

The second half started a bit more exciting. After a poor clearance from a defender, Olympic screwed up the chance. Two minutes later they got their act together, after four attempts, and finally scored: 0-1. This was roughly the end of the Olympic efforts, as they sat back deep, leaving the initiative to the incapable hosts. 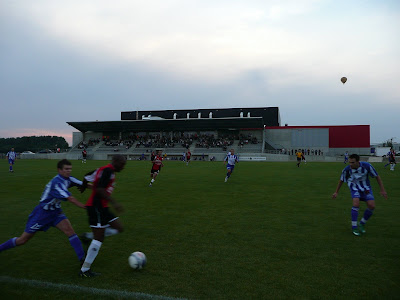 The rest of the game was as uneventful as the first half. Tongeren pushed and kept playing rough. Olympic did just enough to stay in front. A minimal performance. As the game got ino extra time, the guests scored once more: 0-2, the final score. 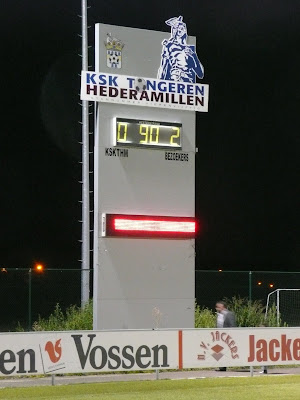 I guess this game made it clear that it’s time for Grondhopper to leave Belgium behind him. KSK Tongeren was my 53rd team in Belgium, and again (as KV Turnhout before it) a disappointment. The difference of the Belgian third divisionist and the German fourth divisionist was huge in all aspects except for the level of play. The ambiance, fan gear, and support in Germany is just so much better.