Barely four days after returning from my 300th hop/club, it was time for the next trip. This time my brother T.M., the original hopper who gave me the taste for groundhopping, was my companion. We met around 11 at Schiphol airport, from where we set off for a two-day trip of roughly 1850 km!
Esbjerg fB – AGF (15-05-2008) 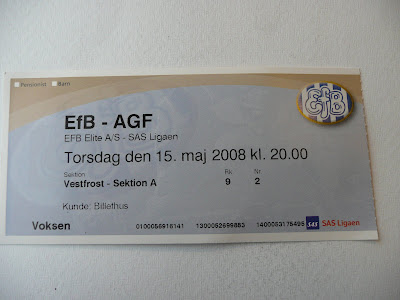 Protected by the traffic gods we drove the 775 km from Schiphol to Esbjerg roughly within 8 hours, including short stops, with no traffic jams and little problems around roadworks. Although Esbjer is a small town of ca. 70.000 people, in the Southwest of Denmark, it is the country’s fifth biggest city. Hence, it is not that surprising that it would house a serious football team, Esbjerg forenede Boldklubber, which has been Danish champions five times (mostly in the 1960s). After a short search in the outskirts of the town, we found our way to the stadium. However, before parking our car opposite to the ground, we made a short stop at the EfB Shop, which is a couple of minutes by foot from the stadium, to buy a pin (for T.M.) and a pennant (for Grondhopper). 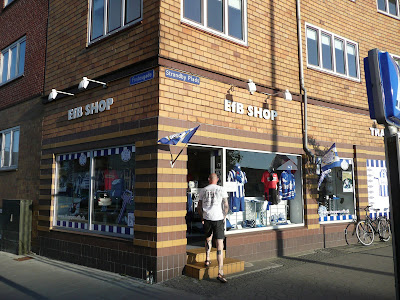 Esbjerg fB plays at the Blue Water Arena, named after a main sponsor. Traditionally named simply Esbjerg Fodboldstadion, it was built in 1955 and expended in 1999 and 2004 (don’t you just love wikipedia). With a capacity of 13,282, it is the biggest Danish football stadium outside of Copenhagen. And it is currently being rebuilt yet again, making it both more modern and bigger (up to 18.000). 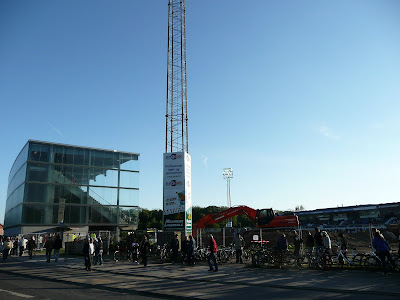 As a consequence of the rebuilding, the ticket offices are externalized, i.e. in small huts next to the stadium, together with food stands and another fan shop. We bought covered seating tickets at the Vestfrost stand at 130 DKK (ca. 17.50 euro). 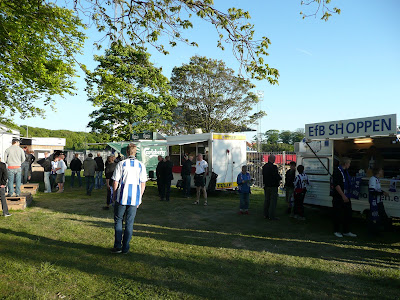 We entered the stadium, where I sampled a local sausage (which, compared to German sausages, was mediocre). The stadium was quite full (at least where there was stand ;-). The game this evening was between the numbers 6 and 10 (out of 12) of the SAS Ligaen (First Division) and was attended by 6.112 people (according to the club), many of which with fan gear on. Some 150 away fans had driven the 168 km from Aarhus. They must have gotten overexcited from this trip, as before the game they started to burn various items in their corner, which created a huge black smoke screen. 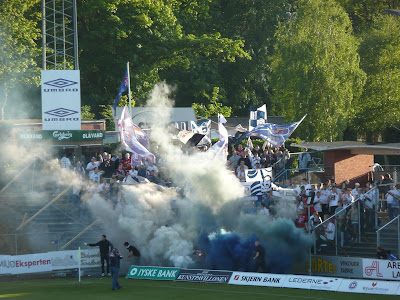 As AGF were still playing to stay up, and Esbjerg were without any specific goal, it wasn’t surprising that the first part of the game was dominated by the visitors. That said, while AGF had the better of the play, Esbjerg did created the few half-chances that the poor game counted. However, in the 25th minute AGF had a good chance, which was initially stopped by the Esbjerg goalie, and then finished with a hard shot in the top of the goal: 0-1. This was well deserved, as the visitors had worked the hardest (both the players and the fans). 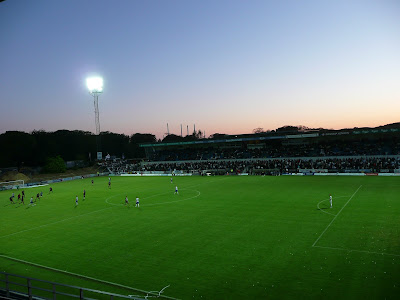 After the shock of the 0-1, the crowd turned even more silent, while the visitors had little problem controlling the game. It seemed that Esbjerg could not be bothered to put in an extra effort this evening. Half-time: 0-1.

The second half remains poor, if only because AGF takes less chances, but at least the hosts start to pressure somewhat. In the 60th minute they miss the goal from a mere 3 meters, a couple of minutes later they head the ball at the goalie, and in the 70th minute a long attack is pushed corner by the AGF goalie. 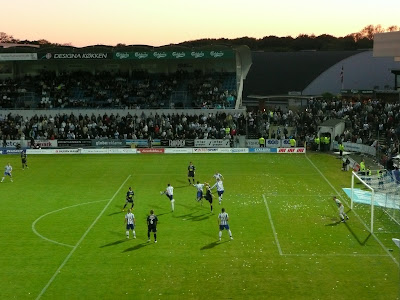 Still, because of consistent forechecking by the visitors, and a lame performance by the hosts, the game remains poor and the two AGF fans next to us don’t really have to worry too much about staying in the SAS Ligaen. The 90th minutes sees an almost-chance for Esbjerg fB, but that is it. AGF wins 0-1 and keeps its spot in the top flight of Danish football.

Football in Denmark is alive but not kicking that much. To be honest, we were a bit disappointed by the lack of atmosphere in the decently filled stadium. Still, the team seems well supported in town and the renovated stadium might not be sold-out often, I guess it will also not be very empty in the future. 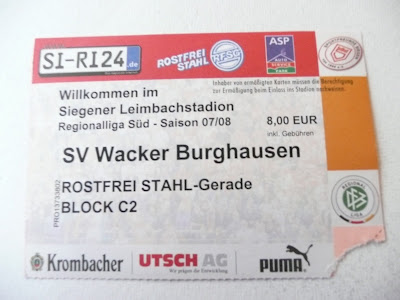 Having spent the night just across the border in Germany, we had ‘only’ some 600 km to drive on Friday. Given that the game started at 19.30, and we left at 11, we had little to worry about. Again protected by the traffic gods, we arrived in Siegen over an hour before the game. The Leimbachstadion is just off the main street from the motorway to the town, somewhat similar to the Erzgebirgsstadion in Aue. We bought tickets for the uncovered standing section at 8 euro, set off for a quick snack at the Imbiss-am-Stadion (hmmmm, Currywurst), and took our place among the fans. 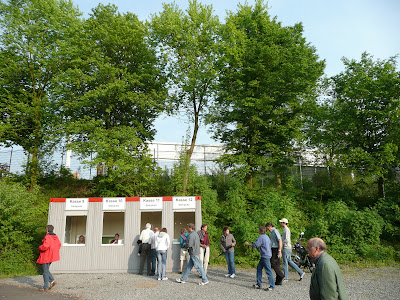 The game in the Regionalliga Süd (Third Division South) was about a ticket in the 3. Liga (Third Division); next season the top teams of the Regionalliga’s North and South are brought together in a new Third Bundesliga. SV Wacker Burghausen seems safe, but Sportfreunde Siegen (Sports Friends Siegen) had to win this game to stay in the race. Consequently, 5.767 had come out to support their team; even though the stadium holds 18.500, this still made for a decent crowd. A brave 100 had traveled the almost 600 km from Burghausen! 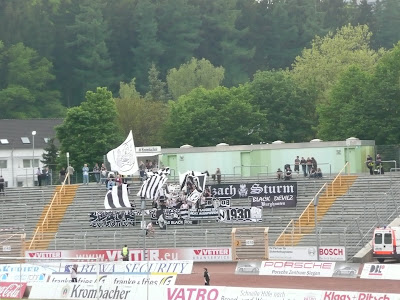 From the beginning it was clear that, at least for the home fans, there was much at stake. People around us got very worked up over even the clearest of off-sides. At the same time, they seemed very forgiving of the poor quality of play of most of the players; except the black striker Okpala, who seemed to have slipped even under the “SFS” fans’ expectations. 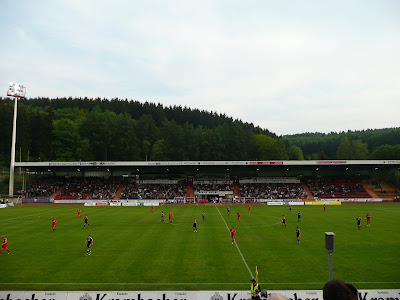 After some uneventful play on both sides, in which Burghausen had most of the play, the Sporfreunde Siegen scored practically out of nowhere. It seemed a lucky goal too, but this didn’t upset any of the fans. 1-0 meant that the dreams for a spot in the new Third League were still alive, and that was all that counted tonight. In fact, that was also all they got, at least in the first half, as the only other chances were for the visitors. That it was still 1-0 at half-time was mainly because of the Siegen goalie, who once stopped two close-by shots within 10 seconds.
The second half was particularly poor. Neither team created any good attacks, let alone clear-cut chances. The home team seemed destined at bringing the lucky 1-0 to the end of the game, while Burghausen seemed no longer willing to put in a serious effort. In fact, if both teams would have played on for another two hours they wouldn’t have scored. 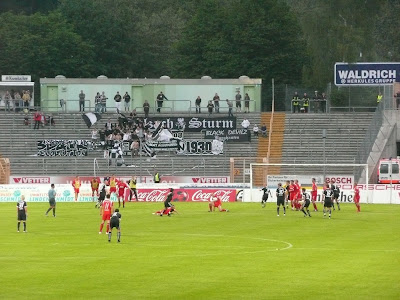 That said, the home fans at various times seemed to have a heart attack; strange, given the lack of real chances and the fact that their goalie seemed their best player. In the end, the relief was electric when the referee finally blew the final whistle and the 1-0 was still on the scoreboard. 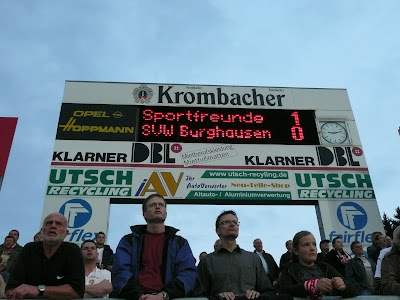 The Sportfreunde Siegen are a great destination for a groundhop. Not only do they have a funny name, their stadium has a remarkable location and the club seems deeply supported in the town. If they would pick up their game a bit, you will have a great time in the Leimbachstadion!
Posted by Grondhopper at 10:14 AM

I love your site, but honestly tell you that you need more for him to monitor those who commented with your records

It agree, this amusing message

It was very interestin and usefull article. Thanks for auther