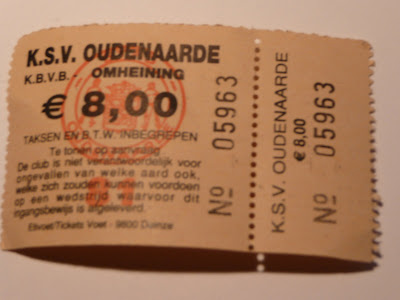 This Saturday I had my good friend M.T. over. It had been over a year that we saw each other and made our last hop. As we didn’t want to go too far, and I have visited most teams in the top flights in a one-hour radius, I decided to take him to KSV Oudenaarde, at roughly an hour of Antwerp. Although rain had been forecast for the whole day, it didn’t rain… until we arrived at the game. 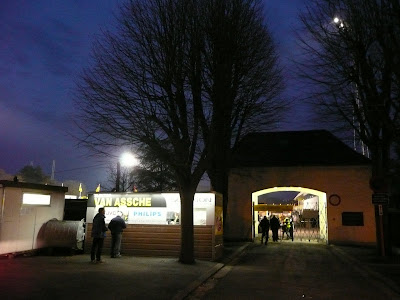 Although we arrived roughly 10 minutes before kick-off, we had no problem finding a spot at the parking lot next to the Thienpondtstadion. As M.T. was buying tickets for covered standing, at 8 euro each, I already ordered some snacks at the frituur (snackbar) in front of the stadium. Satisfied, with the French fries in our hands, we entered the ground, which has a very particular structure. There are three stands, all in different styles, but overall it looks like a poor athletics stadium, including the annoying track.

As soon as we had entered the stand, I had noticed that M.T. was not getting what he had expected. Through all my recent hops with JB, AH and MG, I had forgotten that some of my friends actually prefer to see ‘serious’ games. And that does not include a game in the Derde Klasse A (Third Division A) between KSV Oudenaarde en K. Londerzeel SK in front of ca. 350-450 people (of whom some 6 from Londerzeel, who all stood in front of us)! 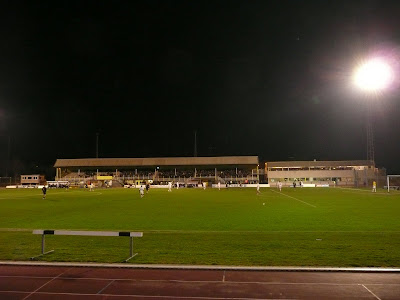 To be fair, the game wasn’t too good. The home team got their first chance after 10 minutes. However, in the 15th minute something happened that can only be described as hilarious (even though I had to hear it from M.T., as I was taking a picture of something else and missed the moment of the match): an Oudenaarde defender played the ball back to his goalie, it hit a little bump, the goalie kicked over the ball, and it rolled into his goal: 0-1! ☺. 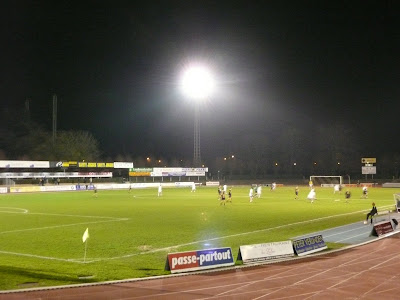 As people around us where still in shock, except for the 6 away fans who couldn’t believe their luck, Oudenaarde tried to get back into the game, and indeed created two (semi-)chances in two minutes. But that was it for them. The visitors would create one last chance, after a good combination was screwed up by a striker. And thus we went into the half time break with an unexpected 0-1 for Londerzeel, a team battling relegation and with only 2 points from all its previous away games. 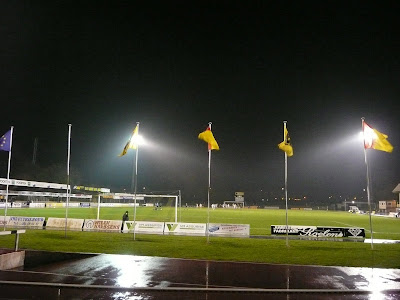 After a refreshing coke zero in the canteen, and a disappointing burger from the stadium snack cart, we took our spot on the covered stand, as the weather had take a turn for the worse. In fact, the whole second half it would rain like cats and dogs. This didn’t help improve the level of play. After a single chance on both sides of the pitch, Londerzeel did what even its own fans hadn’t expected: score the 0-2 through a strong header from a corner. With only 15 minutes left in the game, everyone knew this was the decider. 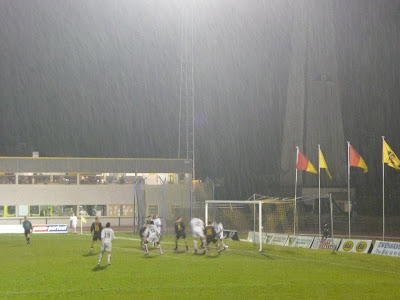 Oudenaarde did try to pressure a bit, and even tested the Londerzeel goalie a few times with shots from afar, but overall the game was over. And so, after 90+ minutes, Londerzeel won its second game in a row… and I was there both times! They should make me their mascot! 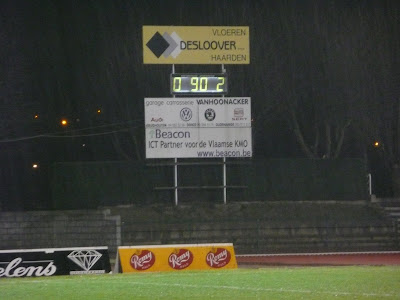 As we walked back to the car, through the rain obviously, I profusely apologized to M.T. Next time I’ll take him to a bigger game… although we might have to go to another country for that.
Posted by Grondhopper at 3:29 PM