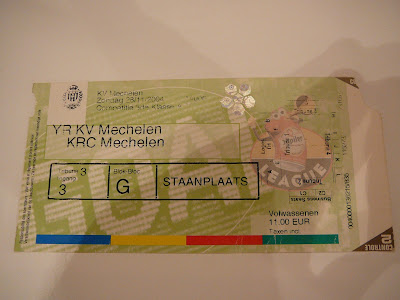 has the Glaswegian derby Celtic-Rangers, the derby Partizan-Crvena zvezda, and … has the Mechelen derby KV-Racing. I know, the Mechelen derby does not have the same scale as the other two, but within the Belgian context it is comparable to these big ones in intensity.

This Sunday KV Mechelen played at home against Racing Mechelen in a sold-out stadium of almost 13.000. True, this is comparable to a game like, say, FC Groningen against AZ, but this was not a game in the First Division, not even in the Second Division; no, the Mechelen derby was played in the Third Division! This notwithstanding, the game was sold-out weeks in advance and attracted fans from as far as Germany and the Netherlands (e.g. Roda JC fans at KV and FC Dordrecht fans at Racing).


As the game had gotten serious out of hand the year before, among others because of foreign hooligans (mostly from the ), the security measures had been increased even further. To me, they were similar to what I have experienced at Feyenoord-ajax in the 1980s; there was minimally one police helicopter, two water canons, ca. 8-10 police vans, and approximately 100 policemen. The few thousand Racing fans marched from their own stadium, escorted by a heavy police presence and closed-off streets, to the KVM-Scarlet-Stadium, popularly known as “Achter de Kazerne” (Behind the Barracks).

After having circled the whole stadium, to kill the time needed to wait for J.B. (who was having his private battle with Belgian Railways), we entered the already quite full stadium at 13.30. J.B. had arranged tickets through his work (buying them through the ticket office would have been impossible); for 11 euro we had standing places at Stand 3, area G, behind the goal. From there we had a decent view, although we sometimes had to stoop to stay under the roof and bend to avoid the posts of the stand. Obviously, we were among the Kakkers, the fans of KV!

At 14.00 the teams kicked off at a beautiful green pitch, which had become nice and slippery because of several days of rain. Perfect for a Derde Klasse (Third Division) derby game! From the start both teams went full for it, tackling whatever moved. The referee kept everyone on a tight leash, leading to two yellow card for KV players within the first 5 minutes. It also prevented the game from exploding, which was not self-evident in this pandemonium. As a consequence a fierce but entertaining game developed in which not much good football was shown, but where both teams battled for each inch of the pitch and every minute something would happen.

In the 25th minute KV got a deserved 1-0 lead through a goal by “Patje” Goots, the former striker and top scorer of d´n Antwaarp (RFC Antwerp) and (self-proclaimed) star player of KV. The stadium erupted and the home goalie and players ran around the pitch like madmen. In the 39th minute the hosts even scored 2-0, somewhat flattered but not undeserved. J.B. and I swayed back and forth with the KV supporters around us into the half-time break.

Already early in the second half (60th minute) the game seemed all but over, when a Racing player got his second yellow card and had to leave. But soon after a KV player met the same fate, by stupidly obstructing a free kick, and it was 10 against 10. KV had played laconic, while Racing continued to fight, which would be rewarded. Although KV remained the better team, the game was changing and around the 75th minute the visitors scored the 2-1. Both before and after that goal KV had various counterattack opportunities, but most were squandered by Goots, whose starlike airs begged for a substitution. In the 91st minute KV was still punished by a late equalizer. Seconds later the excellent referee blew the final whistle.

After having processed the dramatic dénouement of the game, J.B. and I walked to a café to warm our frozen bodies. Having returned to a body temperature of approximately 37 degrees Celsius, we could not but conclude that we had been witness to a fantastic football afternoon. KV-Racing might not be Celtic-Rangers or Partizan-Red Star, it is without a shadow of a doubt the premier derby of and a football fest that is not to be missed.