As I am sitting on the couch in my Indy apartment on a Friday afternoon, I get a text message from my friend Mokumer: I have an extra ticket for the Seattle game. I look at my wife… could I? She doesn’t say no, so I am all over the internet, in the end finding a flight with maximum frequent flyer miles and minimum cash. The next day I take a flight to Portland and on Sunday morning I meet up with Mokumer for brunch at the Marathon Taverna, around the corner of the stadium. 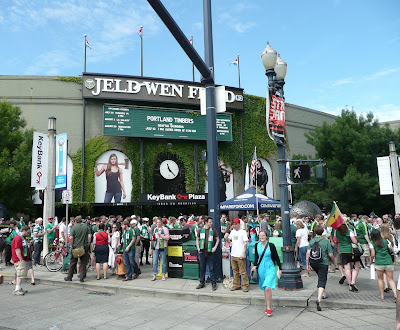 About 12:30, thirty minutes before kick-off, we go to JELD-WEN Field, as PGE Park is now called. I haven’t been at the stadium since they rebuild the baseball stadium into a soccer-specific stadium. I really like the way they have integrated it into the little spot available (JELD-WEN Field is one of the few MLS Stadiums in the heart of the city!). We get into section 137, where the Timbers Army is already present in full force and singing their hearts out.

We decide to sit at the top of the stand, where it is a bit less crowdy. We meet up with some friends of Mokumer, exchange stories about the Netherlands, agree that we need a win and that the "Shittle Flounders" should be destroyed, and join the singing. The atmosphere is electric. The stadium was sold out with 18.627 anxious supporters. I am so happy that I came. 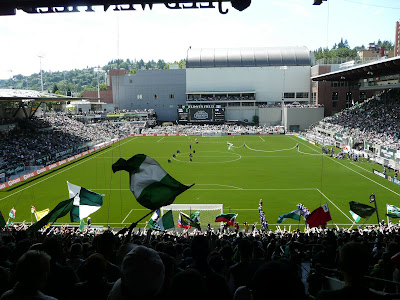 As this is the first ever home game in the MLS against the arch rival, the Timbers Army has created an impressive tifo action. They have made several huge banners, taunting the ca. 500 Seattle supporters who made the ca. 175 miles (275 km) drive south on the I-5. 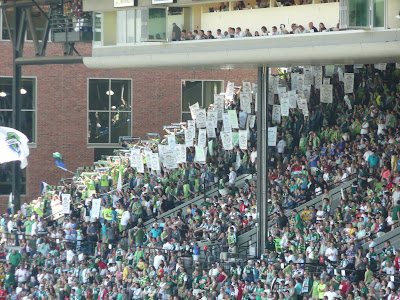 I stand behind most of the huge banners, so can’t see them all, but am impressed by how organized everything is. The Timbers Army controls the sections behind the goal in a manner reminiscent of the great ultra groups in Latin America and Southern Europe. The final banner is a claim to the title of best club in the Pacific Northwest: King of Clubs! 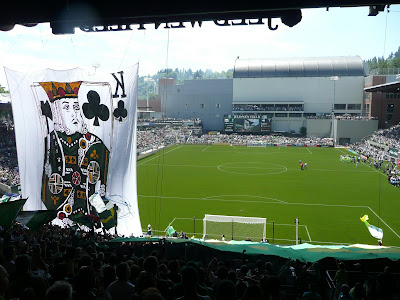 The creativity and swagger of the Timbers Army is not really copied by the boys in green and white. We have, without any doubt, the most British team in the MLS. Everything is physical, long and high balls (even know the tall striker Cooper has been replaced by the very short striker Perlaza), while tactically and technically it is very poor. Fortunately, Seattle is not much better, particularly in the first half. 0-0 is the only logical half time score and, despite the poor play, I have been nervous for the full 45 minutes.


The second half started with a blast. In the 46th minute we score… well, to fair, they score, but in their own net: 1-0 TIMBERS!!! I cannot believe it, scream and shout, and am bathed in beer by someone behind me. 1-0 up, through an own goal… seems to have been the only way it could happen. 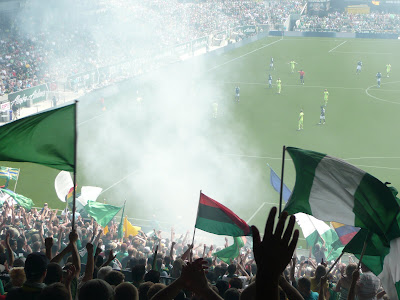 Unfortunately, the happiness lasts only for a short time. Ten minutes later Freddy Montero (“No means no!”) scores a free kick from just outside of the box and makes it look really easy. The Sounders are getting better in the game now, but it is the Timbers that score, again through a lucky. But who cares, it’s 2-1! The second piece of wood, cut by Timber Joey and his chainsaw, makes it up section 136. 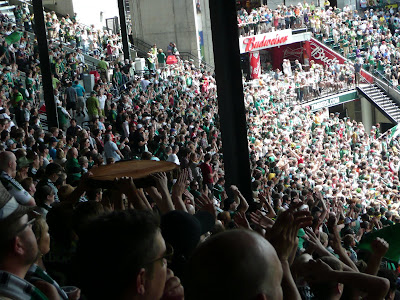 This time it takes us even less than 5 minutes to give the lead away. In the 74th minute they equalize: 2-2. And in the 83rd minute it gets even worse: the last Timbers defender fouls the Seattle striker: penalty and red card: 2-3, game over.
No Picture of Final Score
I am absolutely gutted, although I continue to sing with the Timbers Army and even applaud the players, who come to receive their two slices of wood from Timber Joey in front of the Timbers Army. Mokumer deals with it easier – ajax fans are never very loyal ;-) – and reminds me that this is our first season and, to be honest, we are just not that good. He is right, we are not, but we fight and have the best supporters in the whole world… well, in the MLS at least! 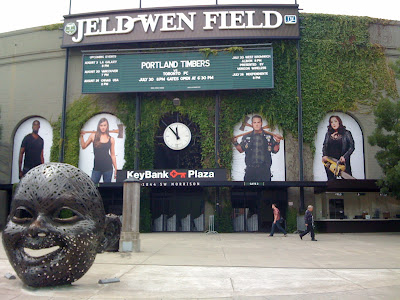 The next day I go back for breakfast at the Marathon Tavern, and walk passed JELD-WEN Field. So peaceful. As if we never lost against the Sounders… if only.
Posted by Grondhopper at 8:10 PM

Please let me know if you're looking for a author for your
blog. You have some really good articles and I
believe I would be a good asset. If you ever want
to take some of the load off, I'Eric D Gray absolutely love to
write some articles for your blog in exchange for a link back to mine.
Please blast me an e-mail if interested. Regards!