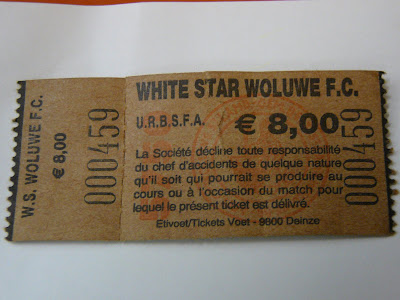 While the First Division has already started in Belgium (see Charleroi-Roeselare), the lower divisions are still playing preseason friendlies, which provides perfect opportunities for a midweek game in the not-too-distant vicinity, namely Brussel-Bruxelles-Brussels. Around 19.00 I met J.B. at Brussels Central Station and we took the metro to Stokkel, where we enjoyed one of the best “frietje mayo” (French fries with mayonnaise) I ever had at Friture Charles. Please, do not miss this opportunity if you ever anywhere close to the square in front of Stockel/Stokkel metro station! Sure, we missed our bus connection, and arrived late to the stadium, but boy, was that worth it. 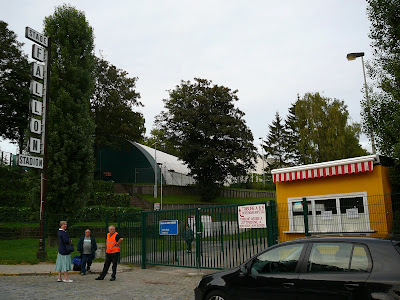 Around 20.05 we arrived at the Stade/Stadion Fallon, a place that defeats any clear description. Allegedly it can take 7.000 people, but I am quite skeptical about this information. While you are able to watch the game for free from at least two full sides of the pitch, we paid our dues and bought tickets for 8 euro a piece at the not overly professional ‘ticket office’. 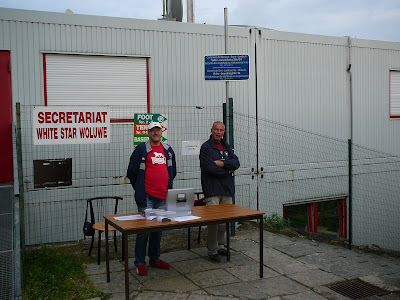 The Stade Fallon counts only one real stand, which is an old concrete semi-circle construction. The two sides behind the goals are without any stand, while the opposing long side has only two small makeshift stands. The horror of the stadium is even increased by the big (new) athletic track around the whole pitch. The only real compensation for this was the small snack tent, in which you had the obligatory Belgian football snacks – hamburger and sausages – but exceptionally this guy carried my favorite samourai sauce. J With a great smile (and burger) I took my place at the main stand. 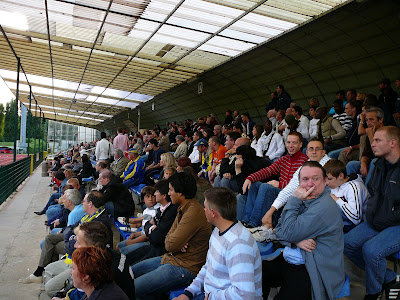 Royal White Star Woluwe is a team from the Derde Klasse B (Third Division), while Royal Union Saint-Gilloise plays for the second season in a row in the Tweede Klasse (Second Division). Both teams are from different districts of and attract a bilingual following, although the dominant language around us was French rather than Dutch. Although difficult to estimate, I guess some 175 people attended this friendly game, of whom at least half were ‘visitors’ from Sint-Gilles. Depending on their place and length, they had a more or less similar view of the pitch as me. 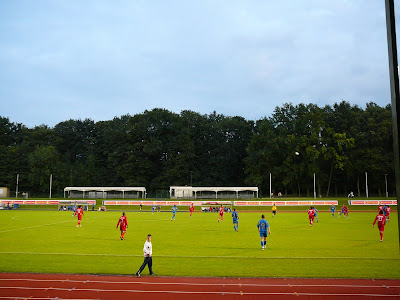 As far as we were concerned, the game had started at 20.00, as they had informed us the day before when we phoned to make sure the game was still on (as the website of neither team had listed it), and the score was still 0-0. This was namely the score on the official scoreboard. After some 15 minutes the home team scored, despite being the much better team until that time. Five minutes later this referee whistled for half time… contrary to the information provided by phone, the game had started at 19.30! While we were under the impression that White Star was leading 1-0 at half time, I found out days later that it had in fact been already 0-1 when we entered the stadium and that the half time score was therefore 1-1. 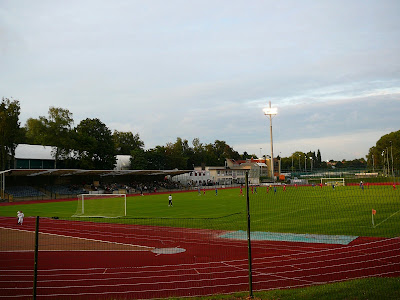 After an uneventful half time the second half started without much excitement. The level of play was generally not too high and the better team, , seemed more interested in practicing set plays than winning this friendly game. They created two chances in the first 15 minutes, but it would be White Star that scored again. A free-kick from approximately 20 meters was deflected and rolled somewhat softly in the goal: 2-0 for us, 2-1 for the rest of the people! 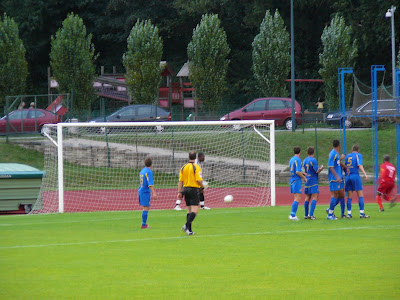 Despite this positive result for White Star, the scoreboard remained fixed at 0-0. After some unsuccessful attempts to change this, the people in charge decided to simply give up and shut off the electricity of the scoreboard. seemed slightly energized by the second goal and started to pressure more. This led to several chances and half-chances, including a header just over the goal. 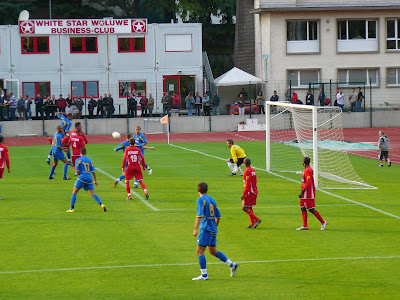 Still, the biggest chances were for White Star, which forced the Union goalie to make various great safes, among others at a close-range shot in the 75th minute, at a one-on-one attack in the 85th minute, and at a powerful shot in the 90th minute (with a beautiful dive). Finally, in the last action of the game, he took the ball of the feet of the Woluwe striker. Clearly, it wasn’t his fault that the better team lost! 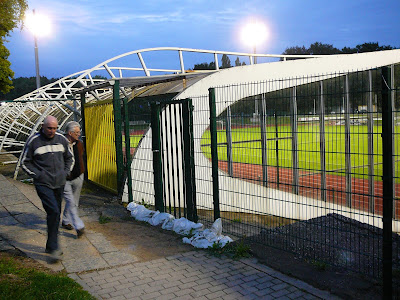 Slowly following the mainly elderly supporters outside of the stadium, we took one last look at the bizarre stadium and walked back to the bus stop. With some self-discipline we ignored Friture Charles and walked directly to Metro Stokkel. Without many words we could agree: Friture Charles is definitely a more satisfying destination than Stade Fallon. Still, it was my 275th club! 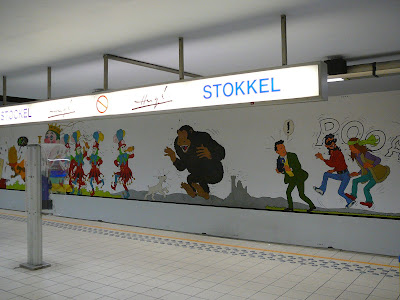 Posted by Grondhopper at 2:26 PM